Welcome to our Patient Education page!

Our team of specialists and staff strive to improve the overall health of our patients by focusing on preventing, diagnosing and treating conditions associated with your digestive system. Please use the search field on the right to browse our website. You'll find a wide array of information about our office, your digestive health, and treatments available. If you have questions or need to schedule an appointment, contact our office.

What is Capsule Endoscopy 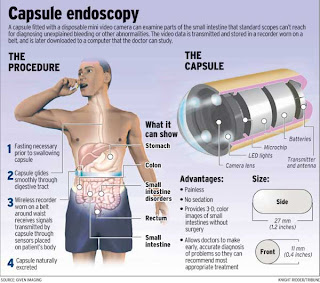 What is TIF Procedure

The transoral incisionless fundoplication is a minimally invasive treatment for gastroesophageal reflux disease (GERD) that is performed in the outpatient setting. The TIF procedure is performed from inside the patient’s stomach without incisions. This procedure delivers patient outcomes similar to those provided by conventional ARS procedures, but is less invasive, has fewer adverse effects, and does not limit future treatment options.

Please check out the links below: How does the Bravo esophageal pH test work?

A small capsule, about the size of a gel cap, is temporarily attached to the wall of the esophagus during an upper endoscopy. The capsule measures pH levels in the esophagus and transmits readings by radio telecommunications to a receiver (about the size of a pager) worn on your belt or waistband. The receiver has several buttons on it that you will press to record symptoms of GERD such as heartburn (the nurse will tell you what symptoms to record). You will be asked to maintain a diary to record certain events such as when you start and stop eating and drinking, when you lie down, and when you get back up. This will be explained by the nurse.

We are proud to offer
FibroScan®
Today’s latest technology for
quickly and painlessly
evaluating liver health.

What are the Symptoms of IBS-C?

The symptoms of IBS-C include abdominal pain and discomfort, along with changes in bowel function. Bloating and/or gas also may happen. Changes in bowel function may include straining, infrequent stools, hard or lumpy stools, and/or a feeling that the bowel does not empty completely. Some people may feel as if there is a “blockage” preventing them from passing stools. They may need to press on a part of their body or change body position to help them complete their bowel movement. How often a person passes stool, or the way it appears, may be different when abdominal discomfort is happening. With IBS-C, abdominal discomfort often improves after a bowel movement. In most cases, symptoms are ongoing (chronic), but they may come and go.

The cause of IBS-C is not known. Some experts think that it relates to changes in how the intestines move and contract, or changes in how the gut senses pain. In some patients, IBS-C may happen after a past infection in the gut. It could also be related to changes in the messages between the brain and the intestines. There is evidence that bacteria which are normally found in the gut, or changes to the composition of those bacteria, play a role. In addition, researchers are looking into possible roles of genetics and/or changes in the immune system.

How Do Doctors Diagnose IBS-C?

The diagnosis is based on a thorough medical history and physical exam. Doctors use a tool called the Rome criteria, a list of specific symptoms and factors that can help determine if someone has IBS-C. The most important of these criteria include the presence of abdominal pain or discomfort and change in bowel habits. There are no lab tests or imaging studies that can confirm a diagnosis of IBS-C.

In certain situations, a limited amount of testing (such as blood work or imaging studies) may be needed to make sure some other condition is not present. There are also “alarm symptoms” that suggest that something other than IBS-C may causing a person’s symptoms. Examples of alarm symptoms include weight loss, bleeding, or if IBS-C symptoms start after age 50 in a person that did not frequently have these symptoms before.

What Is the Treatment for IBS-C?

IBS-C is not life-threatening. It can, however, affect a person’s quality of life. There is no cure, so the goal of treatment is to reduce symptoms as much as possible. Treatments may be focused on improving the uncomfortable symptoms of IBS-C – such as abdominal pain and bloating – or on improving bowel function. Treatments include lifestyle modifications, dietary changes, psychosocial therapy, and medications.

Dietary therapy
Some people find that certain foods can “trigger” or set off symptoms of IBS-C. However, the specific foods that bring on symptoms can vary widely from person to person. Increasing the amount of soluble fiber in one’s diet (for example, oats, psyllium, and flax) can be helpful. Cutting down on caffeine, soda and gas-producing foods is often recommended. Specific diets have been studied and have shown benefit for some patients. Examples include the “low FODMAP” diet (a diet that is low in certain fermentable sugars) and the gluten free diet (a diet that excludes certain proteins that are found in many grains).

It may be helpful to work with a dietitian to better understand possible food triggers. In addition, diets that exclude whole groups or types of food can be difficult to follow, and a dietitian can help make sure your modified diet is both nutritious and safe.

Psychological Therapies
Various therapies focus on treating the central nervous system and have helped patients with IBS-C. Some of these work on how the brain and mind interpret sensations, such as discomfort or bloating. Examples of psychological therapies include hypnotherapy, cognitive behavioral therapy, multicomponent psychological therapy and dynamic and/or psychotherapy. For some patients, psychological stressors can worsen IBS, such as a history of physical, mental or sexual abuse. Psychiatric conditions such as post-traumatic stress disorder (PTSD), anxiety and depression are sometimes found along with IBS-C, and treating these problems may also improve the IBS symptoms.

Treatments Targeted at Bacteria
Bacteria are naturally present in the intestines or “gut” of humans, and they play an important role in normal bowel health and function. ”Probiotic” products are foods or pills that contain live bacteria that may promote gut health. They are sometimes recommended with the goal of changing the types of gut bacteria in the intestine. This can sometimes reduce abdominal discomfort, bloating and gas from IBS-C. Experts are not sure of the overall benefit of probiotics for people with IBS; the most beneficial types and amounts of probiotic foods or supplements also are not known.

Antibiotics are another way to change the population of bacteria in the gut, but there is disagreement about this approach. While antibiotics sometimes provide symptom relief of IBS symptoms, there are potential risks associated with frequent use. If antibiotics are used too often, they can become less effective, and the risk for developing serious infections increases.

Herbal therapies
There is some evidence that peppermint oil or Chinese herbal formulas, such as a supplement called STW5, can improve IBS-C symptoms.

Medications to improve bowel function:
Laxatives and stool softeners often are the first drugs used for patients with IBS-C to stimulate bowel movements. This is because they are relatively safe, inexpensive and widely available. Of these medicines, polyethylene glycol (found in some products sold over the counter) has the best evidence behind it, but other laxatives may be used. It is worth noting that certain non-digested sugars (such as lactulose) or sugar alcohol laxatives can increase bloating. Sorbitol is an example of a sugar alcohol and is found in many sugar-free gums and sweets.

Pro-secretory agents are a newer group of medications that moisten both the stool and the intestine so that bowel movements are easier and more frequent. These include the prescription medicines lubiprostone and linaclotide. Both medications have shown some effect in reducing abdominal discomfort and improving bowel function.

When to See the Doctor for IBS-C

If you have chronic symptoms of constipation and discomfort, see your doctor for a diagnosis and treatment plan to help reduce and manage symptoms, improve bowel function and increase comfort. It can make your quality of life better.

In addition, if you use over-the-counter medications regularly to reduce symptoms, you should consult a doctor to determine the best course of treatment.

Also report abdominal discomfort or symptoms that come with weight loss, bleeding, iron deficiency (low levels of iron based on blood tests) or symptoms that start after age 50. Tell your doctor about any personal or family history of gastrointestinal diseases such as cancer or inflammatory bowel disease.

To find a doctor near you who is a member of the American Society for Gastrointestinal Endoscopy, use the ASGE Find a Doctor tool at www.asge.org.

What is Irritable Bowel Syndrome With Constipation (IBS-C)?

Irritable Bowel Syndrome (IBS) is a common digestive disorder affecting 7-21% of the general population. Symptoms include frequent abdominal pain, bloating or discomfort, and changes in the appearance or frequency of bowel movements. IBS-C is a type of IBS in which the abdominal discomfort or bloating happens with constipation. Generally, constipation is when stools don’t pass often enough (less than three times per week). Having hard stools that are difficult to pass or the feeling of an incomplete bowel movement are signs of constipation.

Understanding Irritable Bowel Syndrome with Constipation (IBS-C) IMPROVING DIGESTIVE HEALTH THROUGH EXCELLENCE IN ENDOSCOPY Since its founding in 1941, ASGE has been dedicated to advancing patient care and digestive health by promoting excellence in gastrointestinal endoscopy. This information is the opinion of and provided by the American Society for Gastrointestinal Endoscopy. Gastrointestinal endoscopy helps patients through screening, diagnosis and treatment of digestive diseases. Visit www.asge.org to learn how you can support GI endoscopic research, education and public outreach through a donation to the ASGE Foundation.

Since its founding in 1941, ASGE has been dedicated to advancing patient care and digestive health by promoting excellence in gastrointestinal endoscopy. This information is the opinion of and provided by the American Society for Gastrointestinal Endoscopy.

Gastrointestinal endoscopy helps patients through screening, diagnosis and treatment of digestive diseases. Visit www.asge.org to learn how you can support GI endoscopic research, education and public outreach through a donation to the ASGE Foundation.

Copyright © 2018 American Society for Gastrointestinal Endoscopy Important Reminder: This information is intended only to provide general guidance. It does not provide definitive medical advice. It is very important that you consult your doctor about your specific condition.